Have you ever stalked a recipe?  Checking the webpage daily just to catch a glimpse?  I have been stalking this recipe ever since Annie posted it on her blog two months ago.  This cake is like the motorcycle-riding bad boy (or girl) you know you shouldn’t date, but can’t stop checking out.  Eventually you just give in, and before you know it you’re speeding down the highway, hair blowing in the wind.  The intensity is fleeting, but at least you’ll have a subject for daydreaming, and stories to tell. 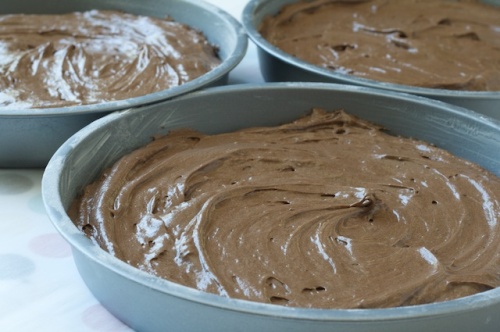 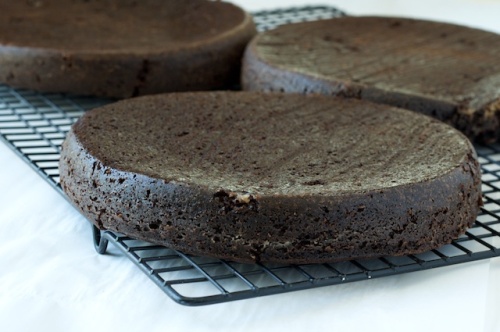 My friend Carol recently celebrated a milestone birthday (three whole decades of life!), and since I couldn’t give her a motorcycle-riding bad boy, I decided to bake her a cake.  Now, normally on this blog, you’ll find healthy everyday foods.  Foods that will love you back in the long run.  Day-to-day “I love you’s”, scattered with the sporadic slight indulgence, say, a bouquet of flowers, or the occasional whole-grain spiked chocolate chip cookie.  But, every now and again, we just need to pull out all the stops, and treat ourselves to a tropical Maui vacation.  If life were a vacation, then Dark Chocolate Raspberry Truffle cake would not taste so impossibly fudge-y and intense.   Celebrations call for deviation from the norm, in the form of buttercream and ganache!

Now, let’s get one thing straight, before the prospect of making this cake sends you hiding behind a cardboard cake box from your local grocery store.  I’m not a baker.  I am a cook, through and through.  I improvise, I’m disorganized, and I create messes!  The birthday girl Carol, who is in nursing school, says that it is not about learning the facts as much as learning to think like a nurse.  I needed to think like a baker.  For a day (well, two days), I played pastry chef.  First of all, pastry chefs don’t have messy kitchens.  Make kitchen spotless:  Check!  Next, the apron, starched and tied neatly around my waist.  Alright, not starched, and tied slightly off-center, but one can’t change overnight!  What else?  Yes, yes, I know!  Mise en place.  I felt very professional with my ingredients and baking implements lined up like a little infantry across my butcher block.

Have you ever looked at a cake (or a motorcycle-riding bad boy, for that matter), and admired the exterior, just hoping that it is as beautiful on the inside as it is on the outside?  I’ve been let down by many a bakery cake, adorned with more frosting than Paris Hilton, and leaving just as much substance to be desired on the inside.  This is not one of those cakes.  Some chocolate cakes are just that: chocolate, and more chocolate.  Don’t get me wrong, this cake is rich and chocolatey almost to the point of ridiculousness.  However, each bite is balanced with the fresh lightly glazed raspberry filling, silky ganache, and buttercream with just a hint of raspberry puree to tie the whole package together.  The coffee in the cake is barely perceptible, except for an added layer of complexity, and the texture takes on an almost fudge-y consistency when cool.  As if this weren’t enough of a spectacle, the whole darn thing is topped with a silky chocolate glaze.  Really, when you think about it, why not?

All 14 of us sang happy birthday to the birthday girl, then she carefully cut into the cake, serving each of us a piece topped by a raspberry.  One by one, the cake sent the party guests into euphoria, and one by one, they insisted they couldn’t eat another bite.  Then, one by one, they marched back into the kitchen to have just a little more, as if led by a strange invisible force.

If there remains any question as to the addictive and mania-inducing properties of this cake, I leave you with an excerpt from an e-mail sent by the birthday girl herself.  Subject line, simply, “cake”.

Jenny, I have concerns about you posting my fabulous cake on your blog.  Then, other people will request the honor, and I must admit, I am very selfish, and would like to keep Jenny heaven cake all to myself.  I understand if you still feel compelled to show off, just know that I will be requesting Jenny heaven cake for every birthday from now on. 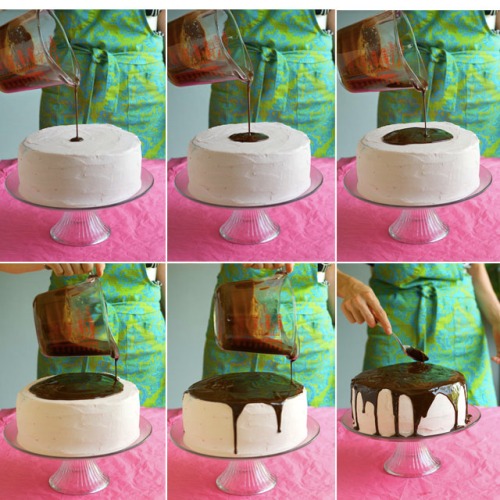 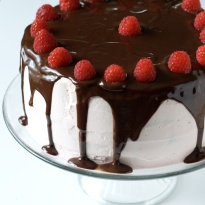 « Chicken Bastila, the Moroccan Way
How to Make Homemade Pasta »