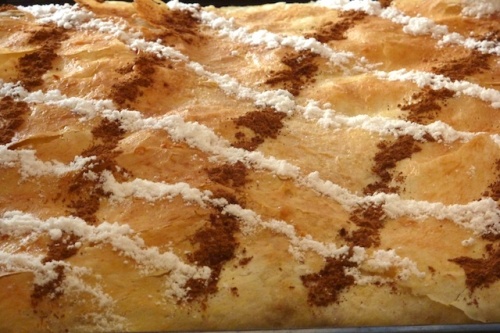 Do as the Moroccans Do…

The day after we arrived in Casablanca, we hopped on a train bound for Marrakech with our friends Karissa and Tom.  We snacked from bags of raw figs, cherries and olives, purchased from the local market that morning, as the train sped past fields of grazing sheep and crops surrounded by expansive cacti “fences”.  I admired the intricate henna painted on the hand of the woman across from me.  Arriving at the train station, we bartered for a taxi, and headed straight for Jemaa Lafna, the main square in Marrakech.  Think of everything you might picture in your head about the nature of Morocco, and multiply it.  Concentrate it.  Only then can you begin to imagine the main square and medina in the center of Marrakech.

Snake charmers played nasal-sounding instruments.  Men walked monkeys on leashes, hoping to trap unsuspecting tourists in an unwanted photo-op.  Henna ladies sat under umbrellas in the sweltering heat, wielding their skin-tinting syringes, and before five minutes had passed , Karissa and I were happily painted from index finger to wrist.  By day, we wandered the covered medinas, shopping for pottery, lanterns, jewelry and spices.  A shopkeeper invited us in, serving us sweet Moroccan mint tea and allowing us to see and smell potent blends of spices from glass jars. 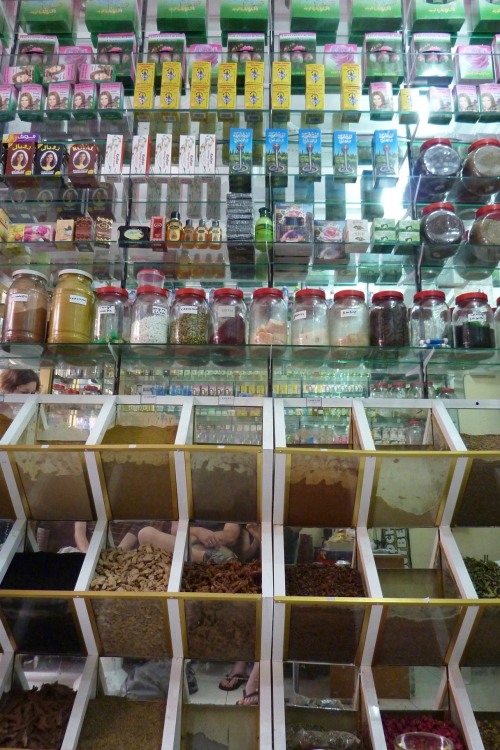 The real magic in Marrakech happens at night.  We wove through hoards of people.  Musicians clanked castanet-type instruments and drums, and storytellers stood on wooden crates, telling ancient tales in Arabic to an enthralled audience.  Smoke billowed from outdoor grills, as food stand owners used every line in the book to drum up business.  “You just ate?  You’re skinny, so you can eat again!”.  We drank freshly squeezed orange juice purchased from a stand.  I am still convinced that it was and will be the best orange juice I have ever tasted.  Deep in the medina, we found our hotel, so gritty on the outside, but so very Moroccan on the inside, with its tiled garden paradise courtyard in the center.  We lay on the rooftop and listened as the last call to prayer echoed from minaret to minaret across the city. 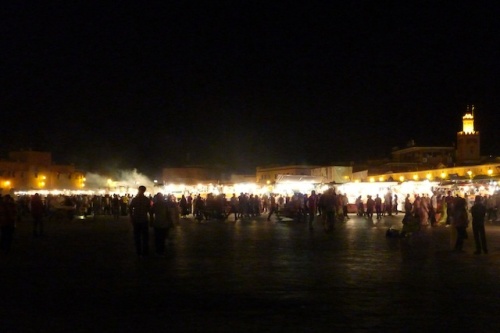 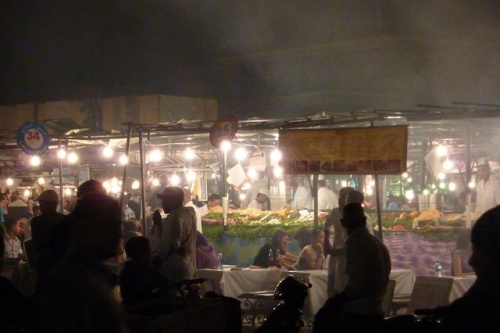 The next morning, we headed back to Casablanca.  When Karissa asked if I’d like to go to the hamam, I nervously thought, I don’t know, do I want to go to the hamam?   Hamam=Turkish bathhouse.  I didn’t know much about Turkish bathhouses, but what I did know involved steam rooms and nudity.  I’ve never been the kind of girl to prance around the locker room in less than a towel, so thinking about being topless around other women and actually relaxing was a bit of a stretch for me, but I had told myself that I wanted the full Moroccan experience, so I had Karissa tell me more.  In Morocco, many households don’t have showers.  People feel that the only way to truly get clean is to go to the hamam.  It is a ritual, and a social bonding time between women.  You can’t get any more Moroccan than a hamam!

A few days later, we walked through the busy streets of Casablanca to the hamam, stopping at a roadside cart to snack on two ears of salted, charred corn.  Once inside, we paid the woman behind the counter 80 dirham, and in return, she gave us two tokens and two towels.  We traded in the first token to sit in the steam room, relaxing and slathering ourselves with black soap.  I felt self-conscious, but free, sitting around chatting, and pouring buckets of warm water over my shoulders.  After the steam room, a woman with flushed cheeks wearing a black bathing suit directed me to lay on a marble massage table for the “savvonage,” a very thorough scrubbing and sloughing which felt both relaxing at times, painful at others.  I left the hamam feeling energized, squeaky clean, and smooth as a baby, exhilarated to been someplace I never imagined I’d be.

The verdict is in.  If only hamams existed in Denver…

Cook as the Moroccans cook…

On Monday, after Karissa and Tom headed to work, Fatima arrived.  After a flurry of mimed greetings, and a few words in French, learned from the internet a few minutes prior to her arrival, I followed Fatima as she fearlessly crossed busy streets, looking after me like a mother hen.  People on the streets looked at us curiously, the odd pair that we were, her in a powder blue jelaba, and me in sunglasses and flip-flops.  We walked down a ramp to the underground market to buy the ingredients to make bastila, a traditional Moroccan phyllo-wrapped pigeon (or in this case, chicken) dish.

First, we walked through small aisles of produce, toward the sounds of clucking and rustling feathers. Fatima spoke in Arabic to the shopkeeper, and he picked up a chicken and weighed it as we left the area (thank heavens), to purchase our produce.  We moved on to buy our phyllo dough, which the seller made to order by dabbing wet dough on a heated metal disc, lifting and each thin sheet of finished dough into the air to cool.  When we returned to the chicken stand, our recently-live chicken was handed to us in a plastic bag, butchered, plucked, and cleaned.  We visited the spice seller to buy the ginger, and I asked if I could take a picture of him and his stand.  He smiled and puffed up with pride, asking if I would bring it back so he could see.  The picture is a little out of focus, but I just couldn’t resist including it. 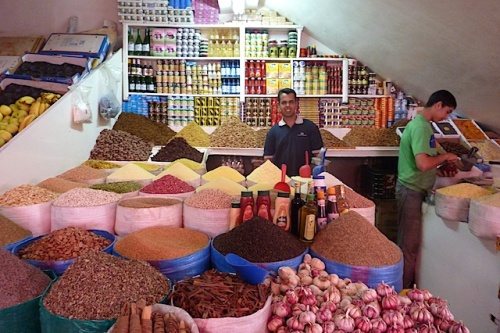 When we returned to the apartment, Fatima and I got to work.  With no shortcuts or convenience foods, such as blanched almonds or powdered sugar, I learned what it means to cook like a Moroccan.

Cover a freshly plucked and cleaned chicken with water in a large saucepan.  Generously salt the water, and boil the chicken until cooked through and tender.  Remove the chicken from the pan to cool before shredding, but don’t throw out the chicken broth you’ve just made in the bottom of the pan!  You’ll use it to simmer the onions.

The shredded chicken goes back into the pot.  Season the Moroccan way, with salt, white pepper, and a generous amount of cinnamon.  Now, pound the saffron into a powder, using Fatima’s favorite kitchen implement, a hammer.  Sweep the saffron into the pot.  Watch as the saffron immediately begins to swirl its red-orange pigment throughout the broth.  Stir.  The saffron will give the chicken a bright yellow tinge.  Next, add some chopped parsley while you wait for the almonds to boil and soften.

Have you ever blanched almonds by hand?  Neither had I.  After boiling them, it’s easier than it would seem.  Just drain them, allow to cool, and pop them out of their skins one by one, pinching them between your thumb and index finger.  Put them into a pot of oil, and fry until golden.  Allow them to cool, and if there’s no food processor to be found, use a hammer!

Now, add the golden raisins, and season to taste with salt, powdered sugar, and cinnamon.  Then crack the eggs into the pot with the shredded chicken mixture.  Fatima emphasizes that you must stir constantly until the mixture is dry, with no raw egg remaining in the bottom of the pan.  Toss in a couple small handfuls of the crushed almonds and stir.  Finally, the filling is complete!  “Mangez!”  Taste your progress!  But not so fast…There’s still work to be done! 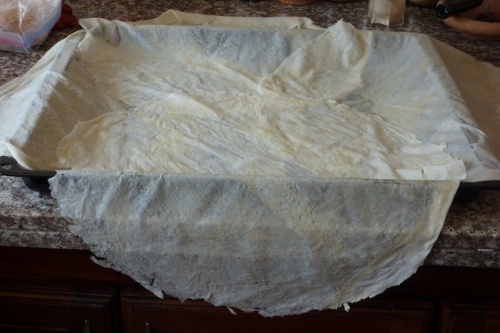 Then, fill the phyllo with the sweet and savory chicken mixture, topping with the fried almonds. 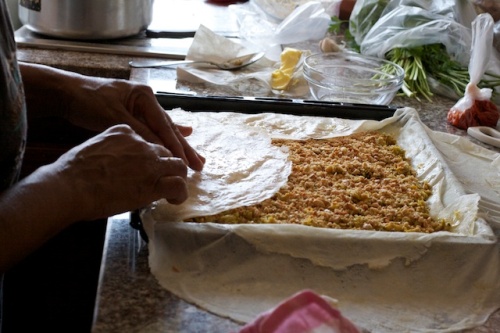 Drape the top with a final piece of phyllo, tuck in the edges, and, you guessed it, dab with butter.  Bake and wait, or make Fatima’s Zaalouk to make the time pass faster. 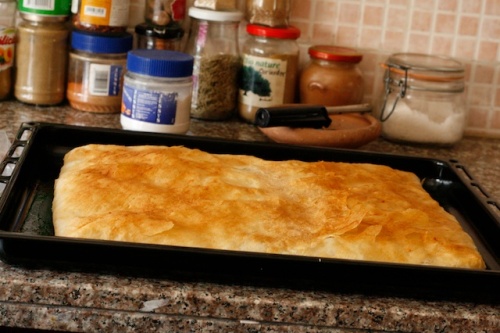 The bastilla emerges from the oven, golden, and so flaky.

Powdered sugar stripes (ie:  granulated sugar pounded to a powder using, you guessed it, a hammer).

Finally, the bastila is complete; sweet and savory, flaky and moist layered with so many textures and flavors, and totally worth the hours of hard work!

Meet new people, eat, and share!  What better to bring people together than bastila?

Missing the recipe?  I have yet to streamline and test this bastilla in my own kitchen.  As soon as I do, I’ll update this post!  This post has finally been updated!  You can find the recipe here.